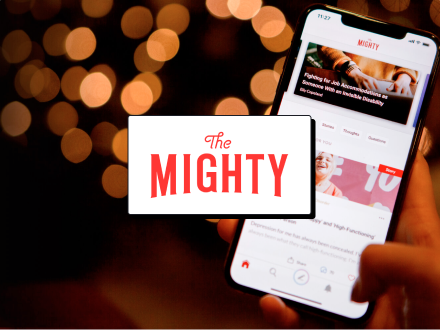 How The Mighty Activated Community to Power Their Mission

At November’s ‘Ask Bevy’ Customer Success Event, we spoke with Ashley Kristoff, Creative Project Manager at The Mighty. The organization started as a publisher, and has since branched into both mobile and desktop applications.

The Mighty is the world’s largest digital health community, and it’s focused on the human side of health. The approach is more personal, with a lot of the content focused on what it’s like to live with certain health issues day to day.

Mission Statement: The Mighty is a safe and supportive community for people facing health challenges, and the people who care for them.

Their community connects people with the right tools and resources, as well as other people who can help them along in their health journey. They wanted to bring new users in by allowing folks to connect with each other beyond the initial publisher offering, and that’s when the community was born.

Before the pandemic, The Mighty’s events were all location-based. At the start, the transition to virtual was reactive and extremely limited. There wasn’t a universal way of continuing to host events in the organization, and the chapters that did pivot to virtual events on their own were all using different platforms. As a result, the team at The Mighty had no visibility into community data.

They needed a way to rebuild; enter Bevy Virtual.

Rebuilding the community through the pandemic

The first step to rebuilding the digital health community for a virtual setting was switching from location-based chapters to topic-based chapters. Then, Bevy Event Tagging was aligned with the existing Bevy platform. To ensure consistency and adoption from existing organizers, The Mighty reconnected with them and took a phased approach to tech consolidation. Lastly, net new organizers were targeted through running events that were known to resonate with existing community members.

How to empower event organizers with Bevy

The Mighty team reached out to active writers, organizers, and community members to gauge their interest in volunteering. Once folks agreed, the team made sure that community members and hosts alike were comfortable with the platform. For new hosts, they were asked to start off as event participants.

They eased hosts in by introducing them to resources like Bevy Academy, and found that doing things in steps removed the large barrier of change that would have otherwise existed. According to Ashley, shifting from Zoom (which required a lot of manual work) to Bevy for events really showed how much activity was happening in The Mighty’s community, which was compelling, especially through the lens of the ongoing pandemic.

Today’s event organizers are successful because of the access they have to internal resources. They were required to move through training on crisis support, and were encouraged to make use of resources within Bevy Academy as they shifted to the topic-based model.

The host of tools and resources have led to a stronger delivery of resources and content during events. Successful organizers bring value to both attendees and The Mighty as an organization, as they are equipped to represent the brand and its story in an authentic way.

"There’s a correlation between the amount of documentation available and the overall success of organizers. For event organizers, the safety of community members comes first because of varying levels of vulnerability." -Ashley Kristoff

Enter the handbook: The Mighty Event Host Handbook contains crisis resources, situation management resources, and more. Since its release, things have been more efficient, and organizers have expressed that they feel more in control of the spaces they lead.

The digital community currently and in the future

Ashley used the word ‘connected’ to describe 2021 at The Mighty. Although living with health issues themselves, she admits that the team is not full of healthcare professionals. They’ve worked diligently to connect their community members with health professionals, and recognize that many people may not have the support system they need to face their health challenges. By having experts and connecting people in similar situations, she believes they are mitigating feelings of isolation and loneliness.

Looking ahead to 2022, Ashley is hoping that community members and organizers alike feel ‘empowered.’ At The Mighty, they want hosts to know that they have access to the tools and resources that they need, and Ashley sees comfort levels shifting towards a desire to branch out and try new things.

When it comes to community members, she hopes that they feel empowered to cope with their health struggles and take part in events that can help them along their journey.

What was the process behind developing the handbook for hosts?

There are writers known as ‘super contributors’ and leader platforms within the community. Both of these forums were used to set a precedent for what a leader looks like, and the framework for the handbook came from there. After that initial process, community safety elements were added in. The goal: Clear communication around expectations for events and other similar outputs within the community.