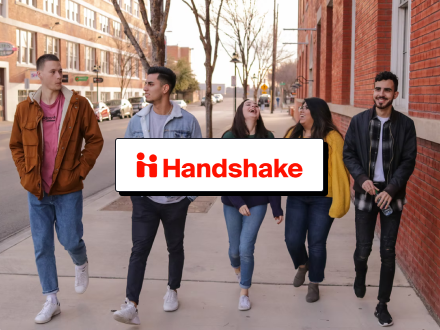 Since 2014, San Francisco-based job search platform Handshake has been connecting employers with college students and new grads. One of the company’s annual highlights is its Handshake Access User Conference which brings together thousands of university career center educators, employees, and executives. The Access event was cancelled in 2020 amid the pandemic, but in 2021, Handshake selected the Bevy community event engine for virtual, hybrid, and in-person events as its platform of choice to host its annual event online, bring together its expansive community, and showcase its position as a thought leader in the early talent recruitment space.

A virtual alternative to networking

While Handshake had cancelled its 2020 conference, that option was not on the table for 2021. As Tiffany Taylor, Manager of Strategic Education Success & Training at Handshake, points out, networking is crucial.

“Access convenes members of the higher education community to talk about trends, consider the best path decisions, and share insights about career services, education, and early talent recruitment. Networking is a huge and critical part of how they survive, and how they stay connected to move policy.”

The 2021 roster was to include 20 sessions, 40 networking rooms, and more than 50 speakers and moderators over two consecutive days.

Taylor says Handshake’s experience with event platforms was limited at best. “We had done Zoom events but had never used an event hosting platform. This was a much bigger challenge that would need the networking capability to reach an audience of thousands. This was more about meeting people where they’re at rather than bringing them to us.”

The importance of community was an integral part of the decision-making process, says Charlene Ditch of Charlene Kate Events who worked with Handshake to manage Access and select an event platform. “I knew that Handshake was a very service-oriented company that prides itself on providing exceptional service within their community and their partners. It’s what they believe in, so it was important to find a platform vendor that would have the same values.”

Accessibility was also a big part in selecting a vendor, Taylor says. “Our user base is not extraordinarily tech savvy. We needed something that was incredibly user-friendly. We asked ourselves, how do we make this simple and accessible to everyone, including people that haven’t had much experience with different interfaces? When we got to demoing three options, Bevy checked all the boxes for the features we wanted at the event. It felt easy and effortless, while the others seemed complex and cumbersome. Everyone felt the same way.”

A particularly compelling feature for the Access conference team was the  virtual lobby. It allowed them to welcome attendees to the event using a video that played at the time they joined and arrived virtually at the event lobby.

“If you show up 15 minutes before I do, you both get to watch the video,” Ditch says. “It’s completely staggered and fully based on whoever shows up at whatever time.”

An added plus was how the Bevy platform allowed side conversations to take place in real time, she adds. “It was as though people were sitting in person. In fact, I was told they had never seen that many conversations take place, which is actually quite amazing.”

Taylor describes the level of audience engagement as the gift that keeps on giving. "People were talking the entire time during sessions. It actually became this offshoot of the networking sessions, because folks were continuing to chat, even in the open lobby. When there wasn't a session underway, people would be in there, ‘Hey, I'm on LinkedIn or what are you doing here?’ That ability to duplicate what would happen in real time was really, really impressive.”

The 2021 event exceeded all attendance expectations. The final tally was 5,029 registrants and 3,396 attendees from 1,218 unique institutions–including over 90 participants stemming from UK partners. This was well above the previous average of 1,228 attendees and added up to triple the number of institutions.

Analysis indicated the event drew 50% more chat engagement than other similarly sized events, and saw 2.9 times the number of return attendees. “We had institutions that were able to register all of their people because it was free,” Taylor says. “In the past, many of those folks didn't have the budget to travel and would have to use their entire professional budget to come to this one conference. We were also able to open up the event to community colleges which tend to have even smaller budgets. Getting that buy-in was a game changer we couldn’t have had before.”

The financial impact was also significant, she adds. “We would have spent three to four times the amount on this event in person. I think now is the time that we do need to move together and give our customers more access to each other.  Employers want to know what schools are doing. Schools want to know what employers are doing. There's no reason we should be diluting our resources here.”

Taylor is now advocating to keep a virtual component to its future Access conference and other events. “Hybrid is what should happen. If we have the bandwidth and the resources, then that’s what we’re going to do. I don’t see a way where we would move forward without virtual.”